Most accurate levergun at 200 yards...

Most accurate levergun at 200 yards...

My son has a Weatherby bolt action 308 Win that he'd returning to the factory because it isn't even capable of an eight inch group at 200 yards, and that got me thinking.... (dangerous I know)....

What levergun would I count on for a 300 yard shot that had to be precise and repeatable...???

Probably my Marlin XLR in 35 Remington, but it's not as 'flat shooting' as a 308, so for practical hunting that would make a difference vs known-range shooting.

What levergun would you guys use if you needed 308-level power and wanted to hit a temmis-ball sized target at 200 yards...?
Doctors for Sensible Gun Laws
"first do no harm" - gun control LAWS lead to far more deaths than 'easy access' ever could.

Winchester 88
Savage 95
Browning BLR
Marlin 308 Express
“Gun control is like trying to reduce drunk driving by making it tougher for sober people to own cars.”
Top

I would say that my .358 Winchester in my 2009 Shot Show special BLR could easily do the job! You can use "match grade" 308 Winchester components and fire form them. In the old days, I would have told you a powder charge of Varget with a BR-2 primer would have been "the Bomb" but in today's world, we have to work with what we have. -Tutt
"It ain't dead! As long as there's ONE COWBOY taking care of ONE COW, it ain't dead!!!" (the Cowboy Way)
-Monte Walsh (Selleck version)
Top

My AR10T, as I don't have a lever in big calibers, it's 308 and has a safety LEVER- that qualifies right?

Although hard to find....the 338 Marlin Express is very flat shooting
A bondservant of our Lord, Christ Jesus
Top

Honestly, other than the power level, the old .30-30 is quite capable of that kind of accuracy.
I DID NOT shoot this target ... but it shows the ability .. EDIT: fired with a Marlin 336 built and tuned by Mic McPherson.
130 Speer w LVR.jpg
You do not have the required permissions to view the files attached to this post.
Top

Mine, at this time, would be a 94 from 1899 that was returned to the factory sometime in the 30's. It had a model 64 barrel and magazine in 32WS, the action was slicked up, and had a 56 Lyman installed.
This rifle is unbelievably accurate, and more than capable of 200 yard effectiveness.

I also owned a first year 1886 at one time that had been re-bored in some long ago decade to 45-70. It was crazy accurate. Sadly, it got away in a weak moment.
Be nice.....it's more important than truth.
Top

I had a '70s vintage Marlin 336 in .35 Remington that was very consistent over 100-150 yds. I don't remember shooting it any farther than that. It got caught up in the "Purge" and had been chasing one of the XLRs until they got stupid expensive.
with a little practice and some fine tuning of some hand loads I know I could do that with a couple of my '95s ( .35 WCF and 7.62x54r). I have shot steel that far out with my '86 in .33WCF. Not a difficult shot for that rifle.

I am hoping that Ruger gets around to the XLR models. This time I'll get one of each!

Of the Levers I have the .338 Express would fill the bill . I've never shot them past 100yd. when it first came out on of the members on Marlin owners scored several 300 yard kills on whitetails. Remlin dropped the ball on it . they had their hands full trying to make 30-30's. too bad.
Top

Probably my Shiloh Sharps. The big limitation at 200 is the sighting equipment.

My Winchester 94 .30-30 Trapper is a wonderfully accurate rifle with relatively crude sights. Crude because the front sight blade covers quite a bit of territory and the rear sight is a fixed carbine style ladder sight that I dehorned so it would not tear up my saddle scabbard.

The sights are intentionally crude I suppose. I wanted them to be above all things rugged and that they would not shift from saddle or patrol car use.

For what they are designed for, they are plenty accurate. Across the street or a couple of car lengths I can probably hit a golf ball on demand. At 100 yards with a rest, I can reliably stay in a group the size of my fist. At 200, I don't really know how well it would shoot, never shot it that far.
Top

I've had a 200 yard range on private property available since 2005 and before that, I shot at a club where one of the informal matches was 200 meter bowling pins. I've shot lever actions on all of them. A couple or 94s proved pretty accurate. When my eyes were still good, groups like this weren't uncommon.

This pre-safety 94 Winchester Angle Eject Ranger 30-30. It had been clustering shots right along, so one day when I was seeing real well I shot it at 210 yards, which happened to be the distance from my back yard to a dirt pile I'd pushed up. I never could quite duplicate it, but got pretty close a time or two. 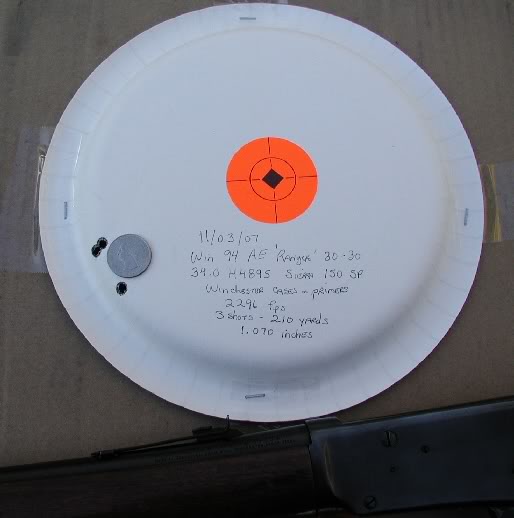 Rossi 92s- Usually the second or third notch on the sight elevator, would get me on the diamond plate at 200 yards. I put finer sights on those guns and with general use 45 Colt or 357 reloads, they were good for three shots in 5-8 inches, depending on what kind of day I was having. My eyes aren't as sharp as 20 years ago and my right shoulder has been rebuilt, which cost me some steadiness. In short, it's getting harder to blame thrown shots on a particular gun and load.

I have adapted and started painting bigger dots on the steel than I used to. That helps some and while zeroing my 35 Marlin three shot 200 yard groups were shaping up OK. I corrected the elevation later and I have no excuse for missing with it out to that distance. 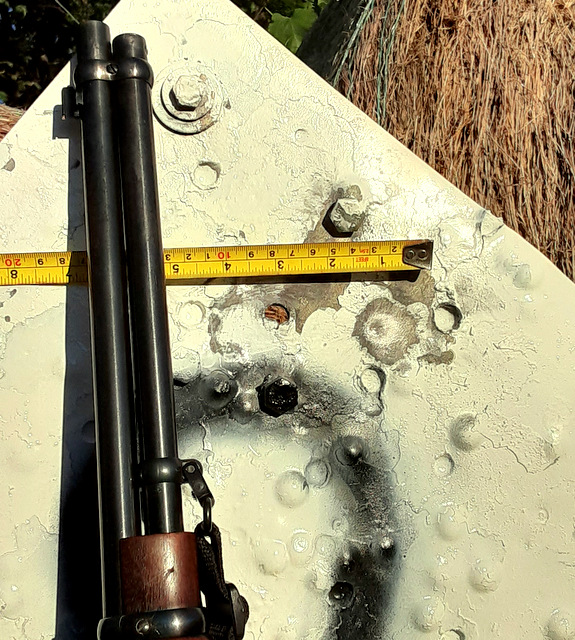 Well, no excuse except the standard ones- and I can think up more if I need them

People were smarter before the Internet, or imbeciles were harder to notice.
Top

I’d go with the 308 Marlin Express first and the 338 ME would be my second choice .
Parkers , Mannlicher Schoenauer’s , 6.5mm's and my family in the Philippines !
Top

Does my B-78 in 30-06 count? Single shot but it has a lever and with only a 2.5X scope it is accurate to the point of being almost unbelievable. These old Hi-Walls had barrels with a 1 in 14 twist so only 165 grain bullets or lighter but boy will it shoot the Sierra 165 grain boat tail spitzer. I haven't shot it much in the last 30 years but when my eyes were still good it was very good and I took many a whitetail with it. Dime size groups were normal at 100 and I shot it on paper out to 350 and it was still holding within 3 inches.
M. M. Wright, Sheriff, Green county Arkansas (1860)
Currently living my eternal life.
NRA Life
SASS
ITSASS
Top

Any of the clip magazine fed levers in the same caliber. Mine is a Belgium BLR that'll do that in another's hands, but not mine.
Top

My most accurate lever actions are BLR in 308, Savage 99 in 308, and a Browning 1895 in 30-06. I bought the Savage 99 to send tp JES to change to a 358 Win but after shooting, it was so accurate I couldn't do it. When my eyes were good I would shoot gallon jugs with the iron sights at 200 yards all day long. My buddies struggled to hit them with their scoped guns. The 180 gr hornadys were spot on for that gun.
Top

Since I don't have a .308 -level levergun, I'd use my Browning 1886 in 45-70! Especially since I understand "temmis-ball" sized targets are the size of basketballs!

I would go with my Savage 99F in 308 Win since I can load it with match bullets and has mounts for scope. My newly acquired Winchester 94 in 307 would fit the bill also but is limited with bullet selection and no scope mount.