Violation of the rules will result in deletion of the topic.
Post Reply
12 posts • Page 1 of 1

One of the Chauvin jurors is an activist.

This is so wrong that you can’t make it right.
Top

Just the one ? Who else lied ?
.
.
To anger a Conservative lie to him, to anger a Liberal tell him the truth.
Theodore Roosevelt.
Top

I just saw that today. Funny how all this "stuff" comes out after the fact.
In my 20 years of Army service, I can say that generally, blacks would cover for each other. And generally, when I had to counsel young black troops, I was accused of racism.
Not always. Not always.
Studies Have Shown That Chubby People Live Far Longer Than Those That Make Fun Of Them

mistrial was the goal from day zero. that way they can really ramp up the damage to the community

First an alternate juror came out who admitted that she was scared that she would be victimized by the mob if she went against them. Since she did not actually vote on the verdict, not a problem. But it opened some good reason to question things.

This guy goes out and gives interviews last week (his 15 minutes of fame I suppose) and it wasn't long before folks found out about the activism.

Who knows what else is out there?
Top

Who knows what else is out there?

For starters, Mad Maxi Pad was front and center promising more and better violence and burning if the "right' verdict wasn't reached. But, she'll get a pass Those People always get a pass.

Those People? Obviously you mean Dirty Rotten Lying Scum Democrat Politicians!
D. Brian Casady
Quid Llatine Dictum Sit, Altum Viditur.
Advanced is being able to do the basics while your leg is on fire---Bill Jeans
Don't ever take a fence down until you know why it was put up---Robert Frost
Top

See what you learned counseling those young troops?

Government office attracts the power-mad, yet it's people who just want to be left alone to live life on their own terms who are considered dangerous.

History teaches that it's a small window in which people can fight back before it is too dangerous to fight back.
Top

it's a wonder of the world that "Those pEOPLE" NEVER get labeled with the label they love. i see them get called all kinds of different things, but only "those people" call themselves the name they are proud of

Chauvin is already appealing. Between Maxime Waters running her mouth and now this, it almost a sure thing that a mistrial will be called. The left will use it as an excuse for further Burn-Loot-Murder riots. Then comes "round 2".

IF (a big "if") they have enough courage to declare the OBVIOUS mistrial, and if they actually seat a sequestered fair jury (an even bigger "IF"), they may get Chauvin on one count of 2nd degree manslaughter - tops.

Which will lead to exactly what the left actually wants... more excuses to B-L-M riot...

Blaine wrote: ↑
Tue May 04, 2021 11:56 am
I just saw that today. Funny how all this "stuff" comes out after the fact.
In my 20 years of Army service, I can say that generally, blacks would cover for each other. And generally, when I had to counsel young black troops, I was accused of racism.
Not always. Not always.

Back in the 70's the USAF started something called "Equal Opportunity / Race Relations" Probably the first bit of kumbaya to hit the military. The results were just what one would expect.

A year or so after Viet Nam shut down things were getting really bad. I had a new airman come into the firehouse where I was a station captain. He decided that he didn't like some of the duties. YOu know things like latrine duty and vehicle cleaning. I finally had to resort to some non-judicial / in-house punishment. As you can imagine he took offense.

He reported to the EORR folks that I was mistreating him because he was a Chicano. One afternoon a captain from EORR came to the firehouse and basically told me he was going to see to it that I was discharged with a less than honorable discharge for being a racist.

I was at that time considering making the Air Force a career. So I was considerably concerned. Unsure of what to do, I called the base fire chief. Now as it turns out he had also been my fire chief while stationed in Spain. His response was disheartening to say the least. He began to laugh. When he finally got himself under control he as me only one question. He ask how my wife was doing. It took a full five seconds to sink in.

Here's a photo of the two of us in Spain. 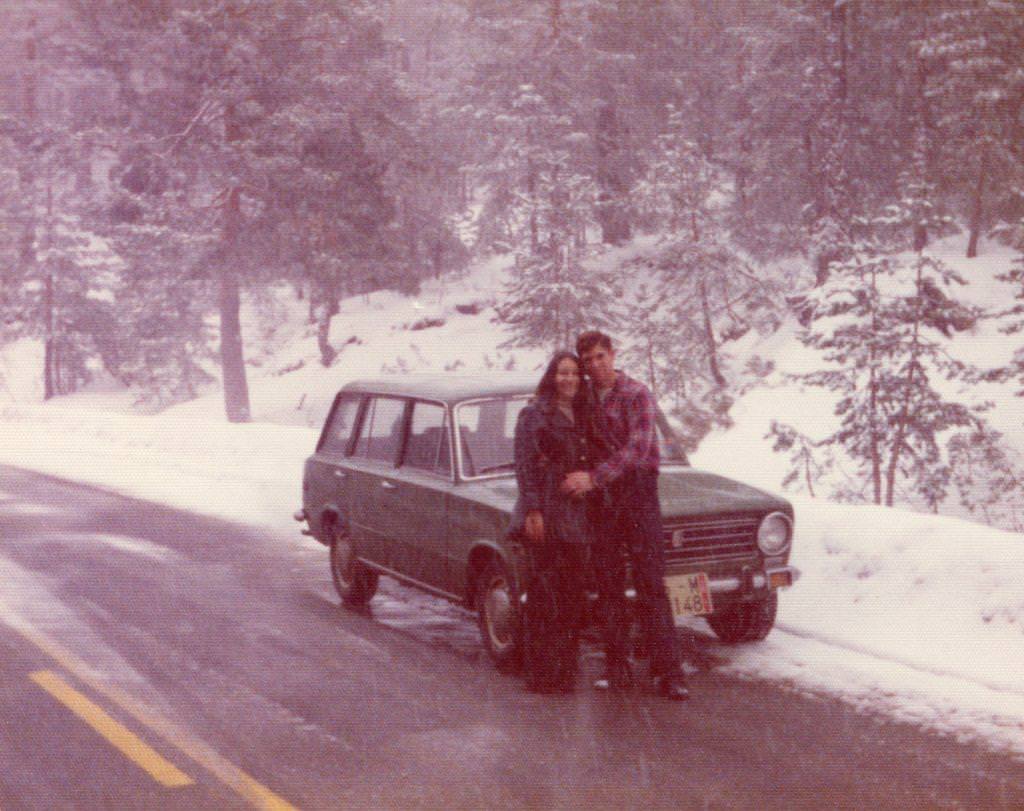 Yep, one of the prettiest little Chicanas you have ever seen.

A few days later the captain returned to the firehouse. Still completely determined to rid the Air Force of the white bigot. I let him go on for a while then just shoed him a photo of my wife. He shut up and left. I never heard from EORR again.

As to the airman, he begged the fire chief to be transferred to another station. It didn't happen. Yes, I can be that evil.

In a way though they won. When the retention NCO came around as my enlistment was ending. I all but bodily threw him out of my office.

I have good friends who tried to talk me into staying by telling me things would get better. Well, they eventually did. But not before it got a whole lot worse.
Jeepnik AKA "Old Eyes"
"Go low, go slow and preferably in the dark" The old Sarge (he was maybe 24.
"Freedom is never more that a generation from extinction" Ronald Reagan
"Every man should have at least one good rifle and know how to use it" Dad
Top

I basically told the retention NCO that if I stayed in, I would commit murder. The guy in the Government issue black suit with the 1 inch wide black tie who was sitting there in the other chair asked me if I would consider a career working in a Governmental Agency. I said no. Saw him twice more. Once when I graduated College, and once after that. I do not know who he was.
D. Brian Casady
Quid Llatine Dictum Sit, Altum Viditur.
Advanced is being able to do the basics while your leg is on fire---Bill Jeans
Don't ever take a fence down until you know why it was put up---Robert Frost
Top
Post Reply
12 posts • Page 1 of 1