I know some of you don't care for the AKs and their variants, but I've had at least one, off and on since I was a teenager. Just thought they were cool, like the cartridge and all but one of them worked every time I pulled the trigger. I didn't even own an AR-15 until I was in my late twenties.
My favorite was a Zastava with an under folding stock and milled receiver. It was a well made, hefty carbine that was a blast to shoot. Unfortunately, that one got caught up in the Purge, while I was in the hospital. I've seen a few over the last couple of years, but they have been going for big bucks. I've bought a couple AKs since, but they were junk.
About a month ago I stumbled across a new one from Atlantic Firearms made from Romanian and US parts. The ALG trigger group is outstanding!
Got it out to the range Monday and it ran flawlessly. I forgot to take a picture of the target with the 123 gr JHP ammo, the group was about half the size of the 154s. 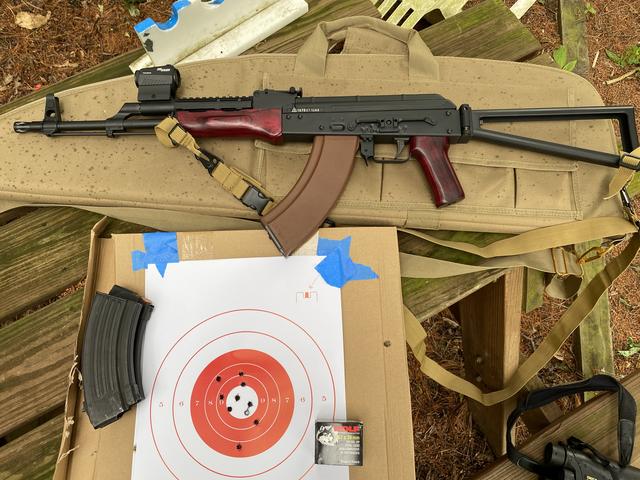 Local shop had the Sig dot sight on sale for $99 so I stuck one on there. Not a huge fan of the red dot sights, but it works well enough. Probably going to get a side mount and standard optic for it. Targets just aren't as clear as they used to be.

An AK is a reliable tool. I think they are cool as well.
Top

Ive always felt the Galil was a better variant of the AK than the original but they are reliable weapons
A bondservant of our Lord, Christ Jesus
Top

If you're going all out, might as well run with the big dogs and get a Valmet.

I have fired a good SKS, and with handloads it gives 3 inch groups at 100 yards on a consistent basis. The SKS and the AK-47 are not target rifles, but they are proven to be reasonably effective and mostly reliable to the point of never needing to think about it. For under 100 yards and deer or pigs, it is just fine. I have carried an M16, and it is not what I would choose for deer size game. Plenty accurate, but the bullet shape is not good for that hunting style for me.
No experience with the other rifles mentioned.
D. Brian Casady
Quid Llatine Dictum Sit, Altum Viditur.
Advanced is being able to do the basics while your leg is on fire---Bill Jeans
Don't ever take a fence down until you know why it was put up---Robert Frost
Top

It's heavy, has poor ergonomics and so-so accuracy, and is ugly as homemade sin -- but it is a machine that is absolutely as reliable as a rock, and that makes up for a lot.
Top

It's heavy, has poor ergonomics and so-so accuracy, and is ugly as homemade sin -- but it is a machine that is absolutely as reliable as a rock, and that makes up for a lot.
Top

GREAT topic, and nice gun too. I'm still kicking myself for not obtaining a few. I have an AR47 pistol with a side-charging upper and steel made-in-usa mags.

got this and got rid of my 30 blackout uppers because i could make that mistake.
Top

I think they are a worthy addition to any ones herd, i dont have a AK but have been on the
hunt for a mini 30, with no luck, since i turned 65 i found a greater need for more fire power
so in the last 2 years i picked up 2 mini 14s & one AR 15, cant belive i waited that long to try
a semi auto, been looking on gun broker at the new psa & pioneer AK 47, they seem worth the money
but not all that sure on that
Top

I've had two Mini-30s. Couldn't make either one shoot worth a snot. Even spent a considerable amount of cash on the last one, and still wasn't reliable enough for me to keep it around. Never had a problem with a Mini-14. My dad still has one my mom bought him in '83, probably a couple thousand rounds through that one.

I've had Egyptian MAADIs, a Hungarian AMD and a few others that all worked well. The one that put me off for a couple of years was a Riley Defense. My FFL friend and I both bought one, his works fine. Mine was a total thing. Each time I called the factory it was "try this" or Try that. Wouldn't exchange it for another. I could shoot circles around it with a '60s vintage, beat to snot, Chinese SKS.

Only one minor complaint with the new one, is it came with a US Palm magazine. Big, bulky and ugly piece of plastic. I have a couple dozen mags from around the world, like the Bulgarian production the best.

Sounds like reliability is a high priority for all of us.
D. Brian Casady
Quid Llatine Dictum Sit, Altum Viditur.
Advanced is being able to do the basics while your leg is on fire---Bill Jeans
Don't ever take a fence down until you know why it was put up---Robert Frost
Top

I've had three Romanians over the years and all were reliable. Re-cutting the crown helps them a bunch, a longer stock & better trigger in makes them lots more comfortable and decent sights make them easier to shoot well. For me the best combination is Zukhov furniture, the Red Star 2-stage trigger and Series 100 Tech sights with the A2 aperture. With that combination I could routinely keep five shots in 4-5 inches on my 200 yard plate using Tula FMJ.

I don't see 'sporting purpose' as having a role in the whether a particular firearm should be available to private citizens; and any honest reading of the Founder's statements on that topic makes it clear the Second Amendment was never about duck hunting. Of course this won't keep gun haters from asserting the AK and its progeny have no sporting purpose at all.

I happen to know better. 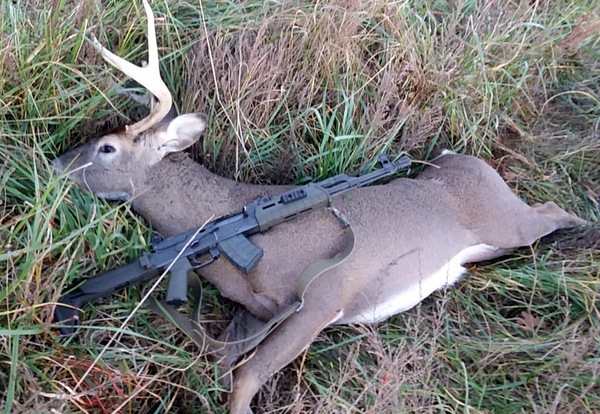 People were smarter before the Internet, or imbeciles were harder to notice.
Top

Sarcasm mode on.
That deer was obviously killed by a weapon of war as it was going about its life. We must stop the slaughter!
Sarcasm mode off.

Nice looking deer.
D. Brian Casady
Quid Llatine Dictum Sit, Altum Viditur.
Advanced is being able to do the basics while your leg is on fire---Bill Jeans
Don't ever take a fence down until you know why it was put up---Robert Frost
Top

AK= Best, most reliable, self defense rifle make. 50+ million copies have been proving it for over seventy years.
Top

I've always appreciated the AK's and their variants, and thought they were great guns. But for some reason I've never owned one. I've had numerous SKS rifles when they were dirt cheap, and never hesitated to sell them if I had someone offer me a profit. I always figured they'd be on sale again and I'd buy another cheap. But they suddenly took a leap in prices, so stopped buying them.
I'd still like an AK just to own one, but with prices being so high now I doubt I'll want to pay the going rate.
Pre WWI Marlins and Singleshot rifles!
http://members.tripod.com/~OregonArmsCollectors/
Top

I think you can go on the Russian side in the Ukraine conflict and pick a slightly used one off the ground...just saying... :(
Top

I was hesitant to post this, thought for sure someone would have something unpleasant to say. Happy to see I was wrong.

Of all the AKs I've had, this one is certainly the priciest of the bunch, but it also seems to be incredibly well made and had the features I was looking for. A solid folding stock and the scout rail handguard. The exceptional trigger is a definite bonus. It's no match rifle, I have those, but functions perfectly and Minute of Bowling Pin at 100 yds. is all I need.