Hello all, I haven’t posted for quite awhile, but I know you all will appreciate this even though it’s not a levergun!
My Dad passed about 6 months ago, it’s been a tough one without my Dad around.
I’ve been working on the mess in the barn on the family ranch. I pulled some visqeen out from between Dads tool box and cabinet and spotted a rifle butt tipped over behind them. It was mostly covered with a flannel shirt, made into a makeshift scabbard.
There was a couple guns that were missing from the house that I figured were stolen in one way or another.
I “talked” to Dad and said let this be your Remington Speedmaster 22, and he answered, as it was!
It is the very first gun I ever fired, Dad taught me how to shoot on that rifle and we shot it many times together while I was growing up. I can still remember, I would stand in front of his gun cabinet, looking at that rifle in his small collection, through the glass of the locked door.
It was hard when that rifle wasn’t anywhere to be found.
My dad wasn’t up on cleaning his guns much and this one I don’t think he ever did clean it!
It was by far the dirtiest firearm I have ever cleaned!
Since cleaning it last week I have shot it a few times, it runs 100% and hits what you aim at!
It has no serial number, pre 68.
The date code on the barrel says it was built January of 1958, one year older than me.
Such wonderful memories with my Dad. 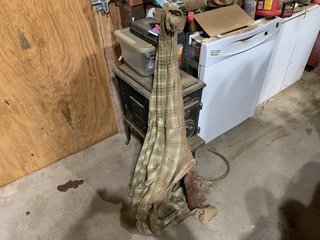 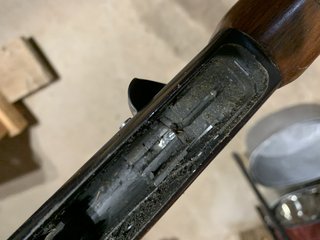 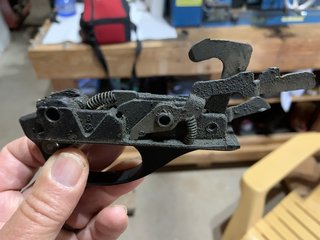 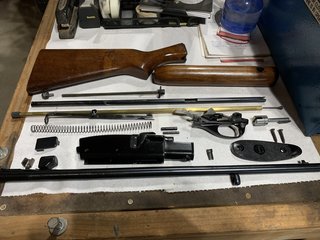 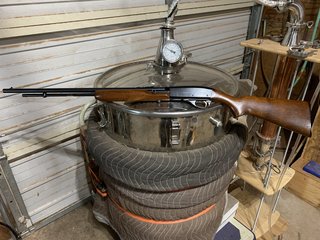 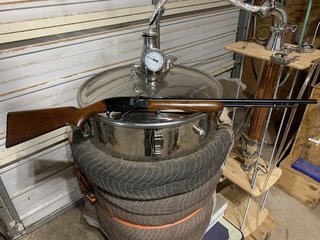 "No arsenal, no weapon in the arsenals of the world, is so formidable as the will and moral courage of free men and women."
-- Ronald Reagan
Top

Sorry to hear about your dad, I dread that day.

looks like the Remington cleaned up nicely. Happy you found it!

My condolences on your dads passing! Hold on to the good memory's.
The Remington will always remind you of the good times shooting with your dad.

My condolences for the loss of your dad. But I'm glad to hear from you.

Joe.
***Be sneaky, get closer, bust the cap on him when you can put the ball where it counts

Sorry to hear about your dad. Been 4 years since I lost mine, not a day goes by you won't think of him.

PRAYERS SENT FOR YOUR DAD!
We are very lucky to have great Dads.
I hope you take that shooter out often...along with the memories...
Enjoy it!
Mine Dads Beretta goes with me to the skeet range most Sundays.
LETS GO SHOOT'N BOYS
Top

Sorry you have lost your Dad. The rifle will be a constant reminder of the big and happy part he played in your life.
Good job on the clean up, enjoy it often.
.
.
To anger a Conservative lie to him, to anger a Liberal tell him the truth.
Theodore Roosevelt.
Top

It's great to have a link to happy memories. They don't fill the hole, but do make it easier at times.

I was with another MK from college at a small pawnshop. They had a Remington Speedmaster hanging on the wall. "How much?" he asked. $50. was the reply. He had the cash, handed it over and we walked out. No paperwork or anything as that shop had no FFL. Anyway, we were at a men's gathering and he wanted to clean it. Got it all stripped down and then had a bunch of parts strewn around the bunk with no clue what to do. I took a look and took over. After a bit of fumbling around I got it up and running for him. That was a sweet little rifle and shot great, as Remingtons from that era are wont to do in my experience. All that to say, that pawnshop find was dirty, but not a patch on your dad's old rifle! May it serve you long and well and bring great memories to the family for decades to come.
Paul - in Pereira


"He is the best friend of American liberty who is most sincere and active in promoting true and undefiled religion." -- John Witherspoon

Thank you all so much for the kind words, a good father is always with you, he taught me how to hunt, fish, work on cars, tractors, gardening and shooting. Almost everything I do he is with me!
I hope my children, grandchildren will feel the same about me and that old rifle will continue to be part of that.

It’s good to be here and hear from old friends, I’ll be visiting and posting more often as time allows, thank you all.
ScottS

"No arsenal, no weapon in the arsenals of the world, is so formidable as the will and moral courage of free men and women."
-- Ronald Reagan
Top

It looks to have cleaned up well. May it always work perfectly for you.
D. Brian Casady
Quid Llatine Dictum Sit, Altum Viditur.
Advanced is being able to do the basics while your leg is on fire---Bill Jeans
Don't ever take a fence down until you know why it was put up---Robert Frost
Top

I looked at the picture and thought "yeah, that looks like my 22" but "speedmaster" didn't sound familiar. I pulled mine out and it says it is a "fieldmaster" 572. They sure look the same: anybody tell me what the difference is between a 552 and a 572?
The greatest patriot...
is he who heals the most gullies. Patrick Henry
Top

One is a pump the other a semiauto. I can never remember which is which until I pull one from the safe

The semi is cool as it uses a floating chamber which allows it to shoot S,L,LR.
BROWN LABS MATTER !!
Top

Great rifle! Killed many a wild turkey with one as a kid and young man. Best turkey killer in my experience is a .22 hp from a rifle with a head shot.
Top