I FINALLY got a chance to shoot the 250 savage 99 I picked up last year.

However, I never made it past 32 grains because the chrony read an average of 2984 for 8 rounds - which I'm pretty sure is supposed to be about the max velocity with the max powder charge, so I didn't want to go up any. I didn't notice any pressure signs at all, and was very pleasantly surprised and the almost total lack of recoil when I pulled the trigger on the first round. Seems like a sweet shooting gun and round.

I followed the loading recipe to the T. anyone ever had this happen? any ideas?

My grandfathers favorite load for his Model 70, 250-3000 was 33 grains of 3031 and an 87 gr Sierra. I've made quite a few for my dad, he still has the Model 70 and it shoots tiny little groups. It was his favorite antelope gun along with the same rifle in .257 Roberts. Unfortunately the .257 was stolen from my uncles house decades ago.

Have fun with your Savage!

The issue with the 99 on velocity is what it does to the cases. Push it too hard and they get distorted.
In the High Desert of Southern Calif. ..."on the cutting edge of going back in time"...

I would have to look up the weight but I remember the best powder in my 99, 250 was IMR 4064. I'm sure I pushed it too far trying to get 3000 fps. Next time I'm in the loading room I'll look up the load. Oh, they were 87 grain Sierras. I still remember that much.
M. M. Wright, Sheriff, Green county Arkansas (1860)
Currently living my eternal life.
NRA Life
SASS
ITSASS
Top

I'm definitely not TRYING to hot rod. This was my starting load and it was already at 3000fps, and I was just a little confused about why it was that high.

I'm just wondering where I go from here. Do I just stick with the 32 grain load as is and now that it's sighted in see how it shoots for accuracy?

So, should I make up another batch but bump them out to 2.515 oal, and see if that makes a difference? if I do that do I also back down a grain or two and work back up.

Here is an image of the primers from the fired rounds - do they look ok to you. 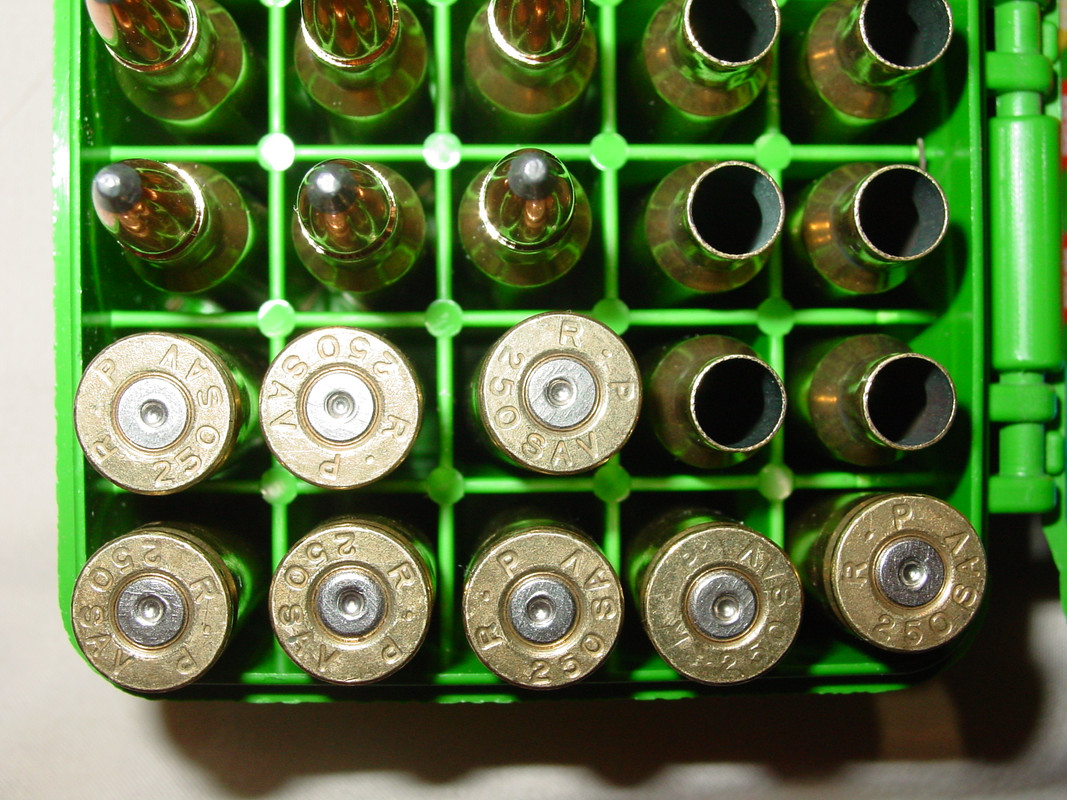 Some rifles shoot considerably faster than others.
In the High Desert of Southern Calif. ..."on the cutting edge of going back in time"...

No sign of pressure there, outside diameter of the primers are still a radius. You have room to increase the charge.
COAL is dependent on magazine length, load up a dummy round at 2.515 and see if it cycles, chambers. If it does try 5 rounds. If not then you have to reduce the COAL until it does.
Like OS said, some barrels are fast, some slow & others are more accurate and some are down right finicky!
BROWN LABS MATTER !!
Top

Ok, great. Maybe I'll just leave the load as is as long as it is acceptably accurate.
Top

That's always been my basis for loading most cartridges, and especially small high velocity cartridges...how well they group. I'm of course always watching pressure signs, but once the groups are at their tightest and cases look good, I don't care too much about velocities.
I use an almost exact same load for my .250-3000 Savage, and it's off spring, my .22-250 also. Only difference is in the .22-250 I shoot either 52 gr. hollow points, or 55 gr. spire points. And the .22-250 comes out the muzzle about 450 fps faster with that same charge and lighter bullet.
Pre WWI Marlins and Singleshot rifles!
http://members.tripod.com/~OregonArmsCollectors/
Top
Post Reply
11 posts • Page 1 of 1