Took the 91/30 sporter to the range this morning

Took the 91/30 sporter to the range this morning

It's a keeper for sure. I need to play with my handloads a bit, but the potential is there. I forgot my spotting scope this morning so 50 yds was it for today. My Enfields really shoot well with the 174 Hornady, but I'd like to try some 200 grain bullets next. The 200 grain Wolf SP was quite accurate but doesn't feed as smoothly as the brass cases. No surprise there.

Overall a nice morning at the range. 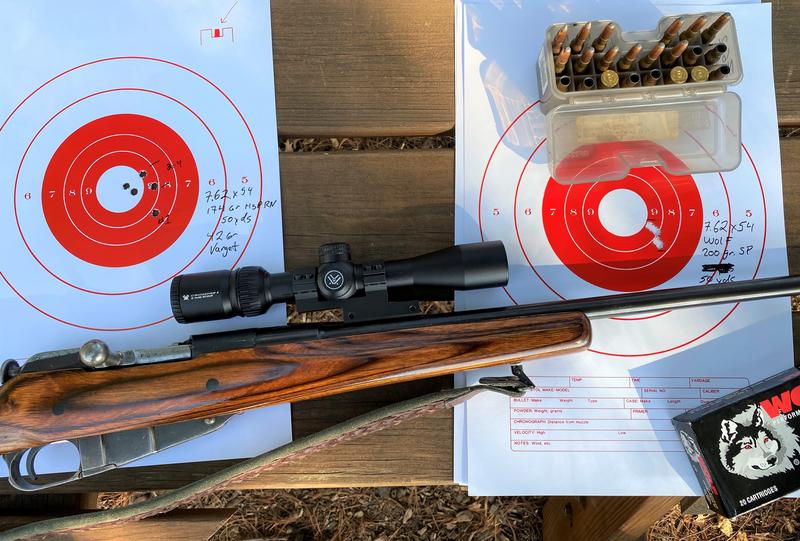 I know, "Foreign Junk" right? Its no Springfield '03, but it makes a great knock about.

No vintage military arms were harmed making this rifle. It's a collection of components put together by someone that knew how.

Wow, your rifle looks a whole lot better than the military surplus I have used....

.
.
To anger a Conservative lie to him, to anger a Liberal tell him the truth.
Theodore Roosevelt.
Top

Lol, i like the disclaimer, i really change my attitude when the 1st thing someone says is: they cut, hacked and bubba'd up a piece of history. I like those laminate stocks, especially the green or gray version. Whats scope is that, Vortex make a scout or long eye relief?
30/30 Winchester: Not accurate enough fer varmints, barely adequate for small deer; BUT In a 10" to 14" barrelled pistol; is good for moose/elk to 200 yards; ground squirrels to 300 metres


Same here Todd, with the volume of inexpensive rifles on the market these days, I don't see a reason to cut up a piece of history. That being said, I grew up in a house full of sporters that my grandfather had done before he was able to buy Winchester Model 70s and other more expensive firearms.

The Vortex is a Crossfire II Scout. It is variable but I keep it on the lowest setting while shooting, though I don't see any issues at a higher magnification like you could with older variable scout scopes. These guys seem to have figured it out.

The stock is from Boyd's and the previous owner put a Timney trigger in it. While I was waiting for the weather to break, I kept thinking that 30" barrel was much too long and might have it shortened, but after shooting it I'm glad I didn't. The rifle is very well balanced with that long barrel counterbalancing a pretty heavy stock. As heavy as it is, I don't really notice it because it carries well and shooting the 7.62x54r is not abusive in the least. Right now it's probably cheaper to shoot and easier to get than .22 lr.


" Tomorrow the sun will rise. Who knows what the tide could bring?"
Top
Post Reply
4 posts • Page 1 of 1