Some time ago I sold off a few duplicates and other firearms in which I lost interest (seemed like a good idea to buy them at the time, though) and finally decided to get into the 30-40 cartridge, which was on my "Bucket List."

I found this NIB Browning 1895 in 30-40 being walked around a small firehall show in Western PA and after some brief negotiations took it into protective custody:

Haven't had much time to develop loads, but using Winchester factory 180s it's about 1.5 MOA off the bench, open sights. This Browning joins my other 1895, an original Winchester in 30-06 from 1907 that was custom-stocked in birdseye maple; some of you may recall photos of that one.

Noah
Might as well face it, you're addicted to guns . . .
Top

i`ve been talking myself out of buying one in 06 for years, one of these days i`ll add one to my line up. I used to have an original in 30-40 but sold it.

"We are all travelers in the wilderness of this world, and the best that we find in our travels is an honest friend." Robert Louis Stevenson
Top

THESE BR. '96 RIFLES AND CARBINES ARE ABSOLUTELY ONE OF THE FINEST CLONE/REPOS EVER MADE BAR NONE. THEY ALL SHOOT LIKE A MILLION BUCKS, HANDLE LIKE A DREAM, AND THE SIGHTS ARE USUALLY DEAD-ON-THE-MONEY.
MINE PUTS 180 AND 220gr BULLETS IN DARN NEAR THE SAME HOLE AND THAT 220 IS A ROCK BUSTIN' SUMBISCUIT.
I HAD THIS RIFLE ALONG WITH ME A FEW YEARS AGO UP IN THE U.P. AT AL'S PLACE AND USED IT TO BUST UP ALL THE BIG ROCKS ON HIS RANGE. INSTEAD OF HIS HAVING TO HAUL 'EM ALL AWAY WE TURNED 'EM ALL INTO LIMESTONE POWDER. IT WAS WONDERFUL FUN !!!
THE ONLY THING I CAN SAY IS DO NOT DROP THE RIFLE DOWN FROM YOUR SHOULDER TO OPERATE THE LEVER OR IT'LL STICK ONE OF THOSE HOT EMPTY CASES RIGHT BETWEEN YOUR EYES. DO NOT ASK ME HOW I KNOW THIS BUT I FOR ONCE AM NOT WHISTLING DIXIE HERE I ASSURE YOU !!
RIDE, SHOOT STRAIGHT, AND SPEAK THE TRUTH
Top

Look like great guns - never shot one.
In the High Desert of Southern Calif. ..."on the cutting edge of going back in time"...

Last year my brother was financially at a point where he could afford to have rifles in two calibers that he has wanted for a long time; 50 Alaskan and 405 Winchester.

I am not sure about the 71, but the 95 was NIB. His guns but, I would love to have either of them in the original calibers.

I think that the 30-40 krag loaded with 220s would be a real thumper on white tails and muleys.

I found one recently myself. I was going to ask Hobie to talk me out of it. I just could not bring myself to do it! Congrats on yours. 1886.
Top

Thank you all for the comments!

Inquiring minds would like to know, Hobie. Details, man, details!

I was about 47 when I first fired an Winchester 1895. It struck me as unorthodox at the time, but I quickly recognized the benefit of a stacked box magazine -- spire pointed boolits could be used. So I bided my time and finally found the 1895 TD in 30-06, made in 1907, pictured below. No collector value as it had been D&T for both a side mount and a "Climbin' Lyman" rear sight, and reblued to boot. But the blueing was gorgeous and the birdseye maple furniture was tight to the metal on all sides. But that's a different thread . . .

Terry Murbach wrote: THESE BR. '96 RIFLES AND CARBINES ARE ABSOLUTELY ONE OF THE FINEST CLONE/REPOS EVER MADE BAR NONE. THEY ALL SHOOT LIKE A MILLION BUCKS, HANDLE LIKE A DREAM, AND THE SIGHTS ARE USUALLY DEAD-ON-THE-MONEY.

The sights on this one were dead-on as you say, Terry. I had to bump the elevator one notch but the windage could not have been more "spot-on."


Terry Murbach wrote: THE ONLY THING I CAN SAY IS DO NOT DROP THE RIFLE DOWN FROM YOUR SHOULDER TO OPERATE THE LEVER OR IT'LL STICK ONE OF THOSE HOT EMPTY CASES RIGHT BETWEEN YOUR EYES. DO NOT ASK ME HOW I KNOW THIS BUT I FOR ONCE AM NOT WHISTLING DIXIE HERE I ASSURE YOU !!

I learned about that the "hot" way from shooting my 1907 1895 TD in 30-06, and I appreciate the reminder. Here's the teacher that doth learned me the lesson:

I passed up a number of Winchester/Miroku repros in 30-40 in favor of the Browning because the Winchester versions that crossed my path generally had tang safeties and checkering. I'm not a fan of checkering but will tolerate it if necessary. If I can avoid it, I will. That said, when the above-pictured 1907 TD with its professionally-done restocking in birdseye maple reached out and dope-slapped me, I made an exception. But as I said above, that's a different thread.

Thank you all again,

Noah
Might as well face it, you're addicted to guns . . .
Top

Noah,
Wait 'till you see what that baby does at 600 yards with the Lyman 220 gr. cast gas check bullet at 1600. This was the velocity the bullets was designed for. You would think that you were shooting a scoped rifle.

I have 2 originals in that caliber and I must say, they are beginning to gather dust as the challenge has worn off, kind of like bolt guns with scopes.

My Grandad (1889 - 1973) hunted often with his 95 Winchester in 30-40. It had a wicked crescent butt plate that wasn't too terrible if you were wearing heavy winter clothes. But in a T shirt, the recoil effect was quite unpleasant.

I noticed that 220 grain bullets are absent from current factory ammo. But this is the only ammo that Grandad stocked in his rifle cabinet. It was deadly, too!

I'm glad that you discovered this rare treasure. Please plan to share photos of hunting kills in season(s) to come.

TR
Fire Up the Grill - Hunting is NOT Catch & Release!
Top

Mine loves Sierra 165gr Gamekings. Pure death to any piggy in the area. Haven't taken a deer with it yet, however.
Some people just need a sympathetic pat on the head.....with a hammer. Repeatedly.
Top

This thread was worth reading just to see something from Terry again.
Top

Scott Tschirhart wrote: ↑
Thu Apr 29, 2021 3:25 pm
This thread was worth reading just to see something from Terry again.

After shooting a new 1895 in .405 for a friend at the range, I had to have one. So I bought a deluxe for the safe and this nice, but not fancy one to shoot and hunt. 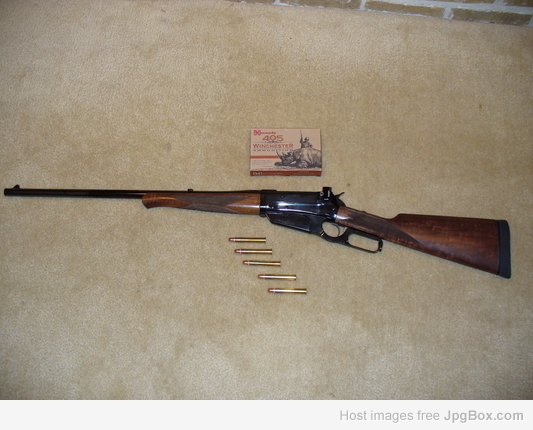 It has shot Hornady factory 300 grain factory ammo at 2250 fps and my handloads with bullets from 210 grains to 400 grains and killed a variety of critters from deer to Cape Buffalo. I like the rifle and cartridge so well that I picked up a Simson & Company double rifle in in .405 WCF that puts a R&L into less than one inch at 50 yards - both fun and deadly to shoot! 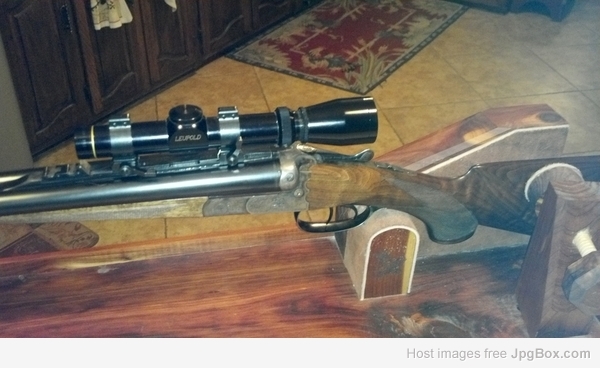 I even loaned it to 86er when his client upgraded his hunt from a fallow deer with a .30-06 to this big beast- he needed a REAL backup rifle: I've always been fascinated with the .405 Winchester after reading about it as a child.

Thanks for sharing.
Top

I have this miroku 95 src carbine in 30/06 and love the gun.There is an original 95 carbine in 303 Brit locally in about 95% condition that I would love to have but if I paid the $5000 asking price I d be divorced and living in my truck.Though I would have the 95 to keep me company 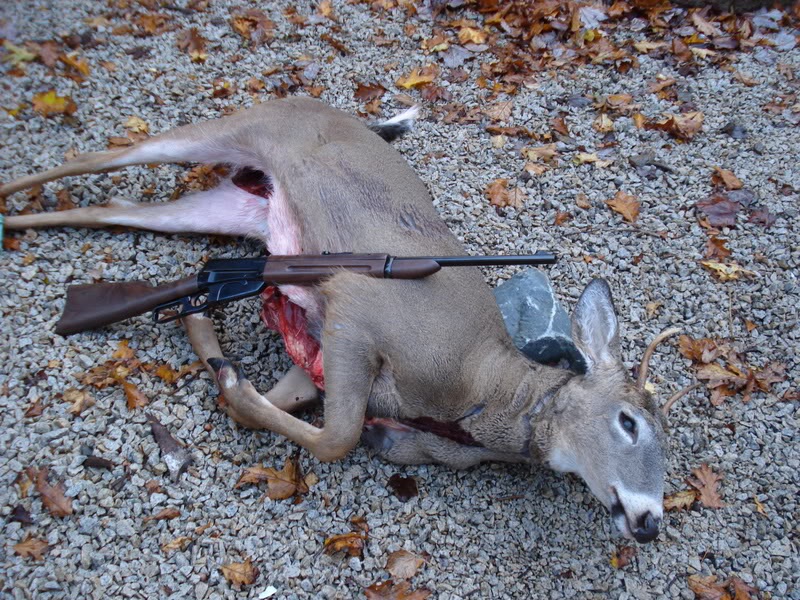