The events in this post actually started late last year, when we were all blissfully unaware of the looming COVID-19 pandemic. In the BC period – “before coronavirus” – the Christmas break represented a pause in my near-constant business travel regiment, and a chance to unwind, catch my breath, and spend quality time with my loved ones and friends.

It was the latter that got me started on this project. While at a Christmas party for the church’s Safety Team at our leader’s home, a group of us were discussing reloading, as he had his set-up out in the garage where we were talking. One of the guys overhead and asked about loading for an antique revolver. Well, as you know for me, that was like baiting the hook and dropping it in the water – with me being the fish!

Turns out that his grandfather-in-law had left him an antique British revolver. He knew it was a .45 caliber round but wasn’t sure of the details. I bit, and bit hard – a mystery and an antique revolver. I told him that if I could get the details there was a reasonable chance I could make ammunition for this gun.

Well, it is a bulldog-type (short barrel/large caliber) revolver firing the .450 Adams (a.k.a. “.450 Revolver” or “.450 Corto”) round, and it was in darn-near MINT condition! Fortunately I had one of these rounds in my cartridge collection, so we verified that this was indeed the right one. As a side note, this was the first center-fire round adopted by the British military – way back in 1868!

So, I did some preliminary research on, of course, the internet, and found that one could manufacturer these rounds using .45 Colt brass. There was another way, using .455 Webley Mk II brass, but I don’t own a firearm shooting that caliber nor the brass for it, whereas I have a lot of .45 Colt brass.

The article called for trimming the length of the brass (to 0.68 – 0.69”) and thinning the rim. Both ended up presenting issues for me. First, the land crank on my Lyman trimmer would not let me go that low. More importantly, thinning the rim caused the primer to stick out, and deepening the primer pocket caused it to open into the main powder chamber of the case (I know I could thin the rim from the top, but that was more work than I wanted to put into it). I assembled one round and hoped for the best – and it wouldn’t chamber.

So, a few months pass and now we are in the midst of the COVID-19 pandemic. Being at home, I’ve tried to reload once a day, mainly focusing on some of the more eclectic rounds I need to feed (and that are expensive to purchase). I decided to take another stab at this round. I e-mailed Starline Brass and explained what I was trying to do and asked them if they would send me some brass to experiment with. They contacted me back immediately (despite being extraordinarily busy like every other company related to firearms and ammunition) and asked how many I wanted. I asked for a half dozen pieces of the .455 Webley Mk II brass – and it showed up two days later! (Starline was my favorite brass already, but now they have a customer for life!).

Here is the cartridge from my collection beside an untrimmed .455 Webley Mk II case: 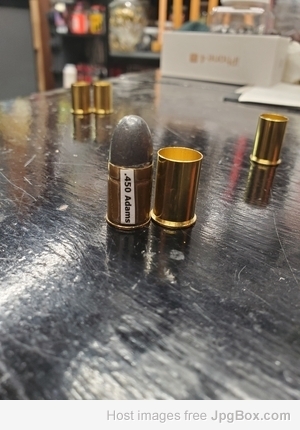 I also found my drill-chucked arbor for my trimmer. Trimming the cases to length posed no problem whatsoever and I shortened all six without destroying any of them in a matter of minutes. 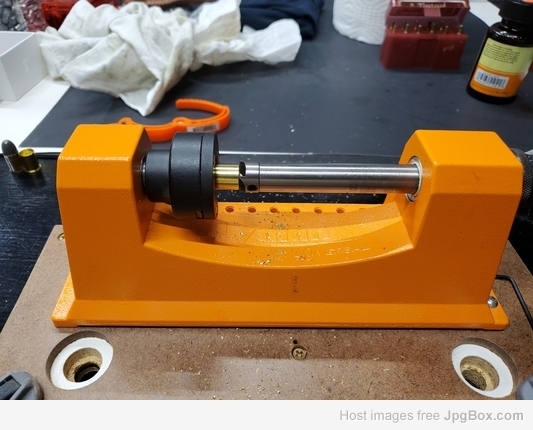 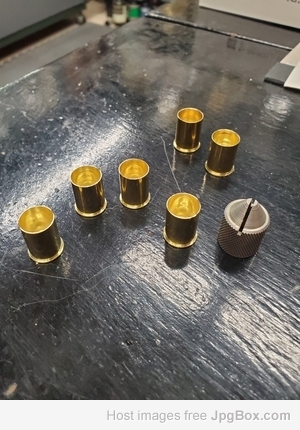 The original factory loading was a 225 grain lead bullet over 13 grains of FFFg black powder. I decided to load a bit lighter, for safety, and because I had some 200 grain LRN-FP bullets on hand. So I set that bullet on top of a charge of 12 grains (filled the case; no air gap). 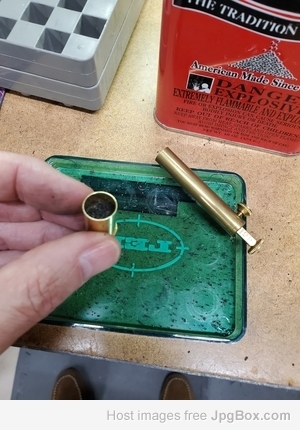 (you can just see my slippers in this pic – proof that it is me!)

I had to use a different shell holder (can’t remember which one now) than the .45 Colt one, a .45 ACP bullet seating die and a .44 Russian Crimp Die pressed ever-so-lightly to crimp the bullet (the taper crimp of the ACP dies would not keep the bullet from spinning in the case). 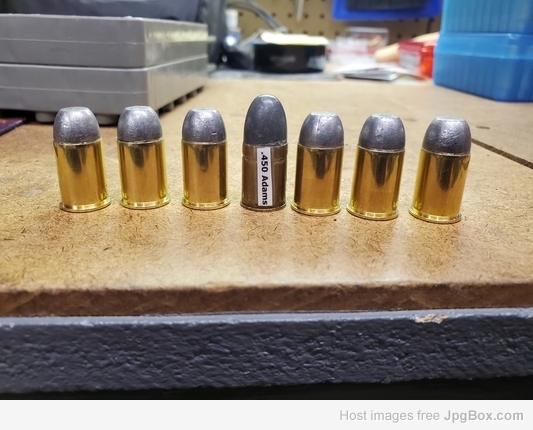 Happy as a lark, I decided to take the process one step further, and created an ammunition box and cardboard sleeve with one of my ammunition labels on it. I know – not technically period correct for this, but “period-like”. Plus it let me play in my workshop and create another label! 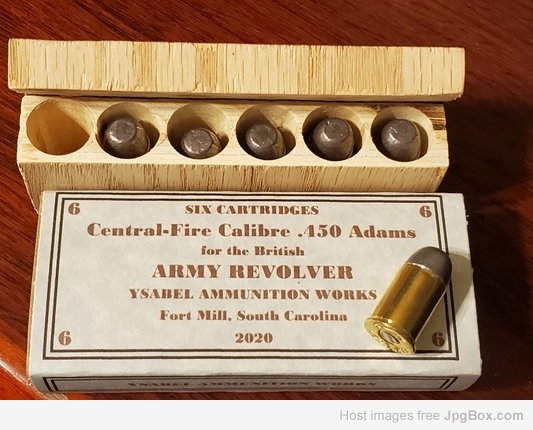 I asked him to bring the revolver with him to church the weekend we opened up again, telling him I had made another try and wanted to see if the new round would chamber. I pulled one out and had it in my pocket to test – and sure enough, it went into the cylinder perfectly! I then put it back in the box I made and gave him the whole kit and caboodle. He was one happy camper!

Once more of the restrictions lift, he said he’d let me be the first to fire this (I’m not sure if that is an honor or he just doesn’t want his hand holding the gun if it blows up!). If these work, as I am now sure they will, we have our proof-of-concept and he’ll order a bunch of brass for me to trim down. A 100 pieces should last a lifetime and then some!

Reloading, solving a mystery, getting a great old gun back in service, woodworking and creating a label – what a ton of fun!

Love it when a plan comes together!!
NUKE err I mean Boycott China- now and forever!!
Top

Glad you could make it work.
D. Brian Casady
Quid Llatine Dictum Sit, Altum Viditur.
Advanced is being able to do the basics while your leg is on fire---Bill Jeans
Don't ever take a fence down until you know why it was put up---Robert Frost
Top

One of the things I love about reloading for old guns is being able to get them back in service. Well done and a nice thing to do.
a Pennsylvanian who has been accused of clinging to my religion and my guns......Good assessment skills.
Top

Nice job Jay. I'd have known those slippers anywhere.
If you're gonna be stupid ya gotta be tough-
Isiah 55:8&9

Sixgun sold me a basket case British snub years ago. I loaded a few rounds for it, but never fired it with more than a primer. The approach was much more cautious, crimped a round ball over the charge of FFFg (weight of which escapes me at this date). I"ve never had the chance to find the missing parts for that pistol, just not enough time up north. They are an intriguing little pocket pistol.
Paul - in Pereira


"He is the best friend of American liberty who is most sincere and active in promoting true and undefiled religion." -- John Witherspoon

From his weapons on the open road no man should step one pace away, you don't know for certain when you're out on the road when you might have need of your spear.
Havamal ( Viking collection of common sense )
Top

GK are you saying the Empire is going to Strike Back?

Well done!
In the High Desert of Southern Calif. ..."on the cutting edge of going back in time"...
Top

They want their Jedi returned. Seems that some powerful politician named Tom Menace needs one to fan him.
D. Brian Casady
Quid Llatine Dictum Sit, Altum Viditur.
Advanced is being able to do the basics while your leg is on fire---Bill Jeans
Don't ever take a fence down until you know why it was put up---Robert Frost
Top

That old Adams blaster should probably be displayed along with a Light Brigade saber.
D. Brian Casady
Quid Llatine Dictum Sit, Altum Viditur.
Advanced is being able to do the basics while your leg is on fire---Bill Jeans
Don't ever take a fence down until you know why it was put up---Robert Frost
Top

That has to wait for the next Millennium
NUKE err I mean Boycott China- now and forever!!
Top

Looks like you did a really nice job on the ammo. I really like the ammo containers too.
Top

A hearty bravo zulu.....which, if you're unaware is maritime speak for job well done.

I was sitting in my room thinking the matter over, when the door opened and Professor Moriarty stood before me.

"My nerves are fairly proof, Watson, but I must confess to a start when I saw the very man who had been so much in my thoughts standing there on my thresh-hold. His appearance was quite familiar to me. He is extremely tall and thin, his forehead domes out in a white curve, and his two eyes are deeply sunken in this head. He is clean-shaven, pale, and ascetic-looking, retaining something of the professor in his features. His shoulders are rounded from much study, and his face protrudes forward, and is forever slowly oscillating from side to side in a curiously reptilian fashion. He peered at me with great curiosity in his puckered eyes.

"'You have less frontal development that I should have expected,' said he, at last. 'It is a dangerous habit to finger loaded firearms in the pocket of one's dressing-gown.'

"The fact is that upon his entrance I had instantly recognized the extreme personal danger in which I lay. The only conceivable escape for him lay in silencing my tongue. In an instant I had slipped the revolver from the drawer into my pocket, and was covering him through the cloth. At his remark I drew the weapon out and laid it cocked upon the table. He still smiled and blinked, but there was something about his eyes which made me feel very glad that I had it there."
m.A.g.a. !
Top

One of my favorite games. Get an old gun to shoot again. Of course you took it to the next level with cartridge box.

Granada/I.T.C./B.B.C dramatization of the scene quoted but with sharps pepperbox instead of the W.R.'s R.C. assumed in the novel.....